Duarte Barbosa was Portuguese writer and Portuguese India officer between 1500 and 1516–1517. He was posted as a scrivener in Cannanore factory and occasionally served as an interpreter of the local language (Malayalam). His Book of Duarte Barbosa (Livro de Duarte Barbosa) is one of the earliest examples of Portuguese travel literature.

After his arrival in Goa with the first Portuguese fleet in 1501, Barbosa made the journey to Vijayanagara soon after. His account mentions the king of Narsyngua, who is probably Vira Narashimha Tuluva. His writings give a detailed account of the layout, the inhabitants and the nature of trade conducted in Vijayanagara.

On the city and its King:

“Vijayanagara is fenced with strong ramparts and by a river as well, on further side of a great chain of mountains. It stands on a very level plain. Here always dwells the King Narsyngua, who is heathen (Hindu) and is called Rayen (Raya), and here he has great and fair palaces, in which he lodges, with many enclosed courts and great houses very well built, and within them are wide open spaces, with water tanks in great numbers, in which reared an abundance of fish.

He also has gardens full of trees and sweet-scented herbs. In the city as well there are palaces of the same fashion, wherein dwell the great Lords and Governors thereof. The other houses are thatched, but nonetheless are very well built and arranged according to occupations, in long streets with many open places.”

On people in the city:

Here, he makes an interesting observation of how equity and justice were observed by the citizens and the ruler.  People of every creed & faith found shelter here and the Vijayanagara Kings were also known to have a diverse representation in their court and the military. Some of the most effective militia commanders under the King were Muslim.  The king patronised and built Jain, Vaishnava and Shaiva temples throughout his kingdom and capital city.

“The folks here are ever in such numbers that the streets and palaces cannot contain them. There is great traffic and an endless number of merchants and wealthy men, as well among the natives of the city who abide therein as among those who come thither from outside, to whom the King allows such freedom that every man may come and go and live according to his own creed, without suffering any annoyance and without enquiry whether he is Christian, Jew, Moor (Muslim) or Heathen (Hindu). Great equity and justice is observed by all, not only by the rulers, but by the people to one another.”

On markets and items being traded:

Here, Barbosa describes the richness and variety in the markets of the capital city as he saw it. There were several temporary and permanent markets throughout the city.  The four main temples in the sacred area each had a sprawling market in front of it.

“Here there is a diamond mine, whence are obtained many good diamonds; all other precious stones are brought from hither for sale from Pegu (Burma) and Ceilam (Ceylon), and from Ormus they bring pearls. Here also is used the broacades of poorer quality brought from China and Alexandria, also metals both wrought and unwrought, copper in abundance, quick-silver, vermilion, saffron, rosewater, great store of opium, sanders-wood, aloe-wood, camphor, musk and scented materials.  Likewise much pepper is used here, which they bring from Malabar (Kerala) on asses and pack-cattle.”

On how men and women dress:

The most interesting part of Barbosa’s work is where he describes in detail how people of Vijayanagara dressed in early 16th century CE.  If you are an illustrator or an artist and would be interested in re-creating his vision, then please contact us. It would be stunning to see writings of Duarte Barbosa visualised into a sketch.

“The natives of this land are Heathen (Hindu); they are tawny men, nearly white. Their hair is long, straight and black. The men are of good height; the women go very trimly clad; their men wear certain clothes as a girdle below, wound very tightly in many folds, and short white shorts of cotton or silk or coarse brocade, with are gathered between thighs but open in the front; on their heads they carry small turbans, and wear some wear silk or brocade capes, they wear their rough shoes on their feet.

The substances with which they are always anointed are these: white sanders-wood (sandalwood), aloes, camphor, musk and saffron, all ground fine and kneaded with rosewater. With these they anoint themselves after bathing, and so they are always very highly scented. They wear many rings set with precious stones and many earrings set with fine pearls in their ears. As well as the page armed with a sword, they take also another who holds an umbrella to shade them, and of these some are made of finely worked silk with many golden tassels, and many precious stones and seed-pearls.”

“The Women wear white garments if very thin cotton, or silk of bright colours, five yards long: one part of which is girt around them below, and the other part they throw over the shoulder and across their breasts in such a way that one arm and shoulder remains uncovered, as with a scarf. They wear leather shoes well embroidered in silk; their heads are uncovered and the hair is tightly gathered into a becoming knot at the top on the top of the head, and in their hair they put many scented flowers.

In the side of one of the nostrils they make a small hole, through which they put a fine gold wire with a pearl, sapphire or ruby pendant. They have their ears bored as well, and in them they wear earrings set with many jewels; on their nechs they wear necklaces of gold and jewels and very fine coral beads, and bracelets of gold and precious stones are fitted to their arms. Thus more part of this people is very wealthy.”

Participate in our Hampi Heritage Tour to hear more fascinating accounts by foreign travelers who visited Hampi during the Vijayanagar era. On this tour, we explore the rich history of Vijayanagara and the renowned architecture styles of Hampi. We will learn about the life in the city, its layout, and functions. We will learn about how trade was conducted around grand temples of the Sacred area. Accompanied by an expert guide, this is an experience you do not want to miss! 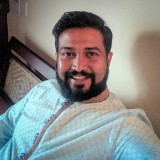 What our customers say